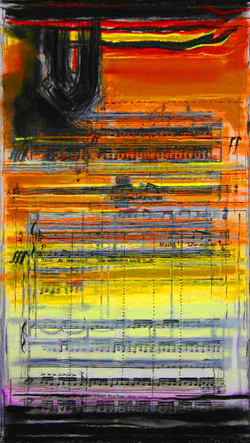 ‘Drama entails the revelation of the quality of human response to actions and events.Opera is drama when it furthers such revelations.’ Joseph Kerman.

In the late nineties, Nigel Buxton’s started his ‘opera’ paintings with the passive act of listening to CDs in his studio as he worked on still lives, pieces which he describes as being ‘very much from the European attitude about empirical observation, trying to draw what you actually saw.’ In this vein one day he began literally drawing the dramatic music he was listening to by photocopying a page or two of a musical score, pinning it on the wall and drawing or painting the music as if he was looking at a landscape, a still life or a sitting or standing human, as the music swirled around him.

What motivated this change of subject and approach was not the music itself, but the dramatic story that the music and sung language of the operas was explicating; contrary to the quietude of still lives was the amplified human drama of opera, with its, by definition, unquiet and unironic portrayal of human passions. A tenor or a soprano on stage bellowing at full stretch is a spectacle which instantly objectifies its own supreme artificiality, and obviates just as quickly any need for tedious self-referential theorising or posing – a freedom I appreciate within my own work as a librettist. Buxton was missing this dramatic element in his own work and, having lived and worked in New Zealand for fifteen years or so, he was aware of the human drama being depicted in the work of artists such as Ralph Hotere, Colin McCahon and John Reynolds. His own response, especially to the opera Wozzeck by composer Alban Berg, was, for Buxton, like a Duke of Bluebeard door opening up on a entirely new room of artistic exploration. The power of the drama resulted in an intense and gripping series of drawings and paintings based on the work of earlier dramatic composers such as Berg, Bartok  and Britten through to exploring the works of contemporary opera composers such as Phillip Glass and Tan Dun.

Wozzeck,, when it opened in Berlin in 1925, astounded the audience with its story about a brutalised, paranoid and tormented soldier who kills his partner after being victimised by all around him. The combined effect of text and music and its anti-militarism and rejection of bourgeois domesticity make it one of the most electrifying dramas in existence: its premiere performance ushered in modern opera, a form now so open and vital  as to include subjects such as terrorism (The Death of Klinghoffer, John Adams), alternative culture excess (The Manson Family, John Moran), and the possible perils of an over enthusiastic taste for fellatio (Powder Her Face, Thomas Adès).

Not all opera is simply gilded entertainment; the best of contemporary opera has the potential to offer a dramatic experience unmatched by film or straight theatre, and it is this special and powerful dramatic element of opera which Nigel Buxton is responding to and transmuting into a frozen moment of drama in his opera paintings. Instead of containing its reflections, meditations, time boundaries, as in a still life, his opera paintings hold a single moment of drama in much the way that the photographs of Cartier-Bresson or Capa isolate a dramatic moment, one that contains what dramatists call back story and suggests a forward dramatic movement towards some sense of climax and resolution; the same sense of expectation we have while sitting in a theatre or cinema, we don’t know what is going to happen but we do know something is going to happen.

In scene two of Wozzeck Wozzeck and his friend Andres are cutting sticks. Wozzeck is unsettled by the place, the rising mist and the toadstool rings which seem to hide strange messages within them. Andres, unconcerned, sings a folk song. Wozzeck hears noises beneath the ground; the rays of the setting sun cause him to have a vision of the world in flames. He shouts out in panic and falls to the ground then, as Andres runs to help him, Wozzeck gasps out ‘Still, alles still, als wäre die Welt tot.’ (Still, all is still, as if all the world is dead). The sun has set and the evening drums can be heard. ‘Nacht. Wir müssen heim.’ Andres says (‘it’s night, we must go home’). Buxton has taken this phrase of music and language from the score to create a stunning impression of a moment of heightened intensity. From the swirling colours sunset to the mysterious shimmering notes of music to the implacable dark underpinning the painting Buxton defines a stark dramatic contrast between the rational homilies of Andres and the eerie fear and teetering madness of Wozzeck, in which is suggested the extreme human experience of a person trying to make sense of life and the society that surrounds him or her.

In the penultimate scene of the opera Wozzeck, having stabbed his lover, throws the knife into a pond. However, as a red moon rises he has visions of being bathed in blood. He wades into the pond to find the knife then wades deeper to wash off the blood he imagines covers him. He drowns. In 'Black Painting', Buxton has painted the music and text we hear as Wozzeck drowns; the painting has a dark and sombre frame in which the bars of music–heard as Wozzeck sinks–seem to float on a mysterious almost illusionary mix of silver and light grey, the individual notes are there but not clearly defined, disappearing into the dark. The painting, as does the music, hovers just at the moment of an individual dying and knowing he or she is dying and the world's grim indifference to any individual death. Buxton's painting resonates with the power and irony of the moment via his medium just as the music does in the opera.

In August the Christchurch Art Gallery will feature a new show by Buxton, works based on the opera ‘Duke Bluebeard’s Castle’ by Bela Bartok, another modern opera masterpiece. In this opera Duke Bluebeard brings his new wife Judith into the vast, circular hall of his castle. Judith sees seven great doors, all locked, and demands that they are opened.  Bluebeard finally agrees and hands over the keys to all seven doors so that she might know about his past. The rooms are a bloodstained torture chamber, an armoury with bloodstained weapons, a treasure chamber with bloodstained jewels, a garden with bloodstained soil, the Kingdom of Bluebeard, (sans blood for a change), a lake of Bluebeard’s tears and finally at the seventh door, Bluebeard's three former wives step out into the hall. They are the Duke's morning, noon, and evening wives, and Judith is now his midnight wife. He weighs her down with jewels, a crown, and a cloak, and she follows a moonbeam into the seventh chamber, the door closing behind her. Bluebeard is left alone in darkness.

Based on a fairy tale the opera is a fascinating and highly dramatically effective allegory for the inner struggles of humans and the ways in which such conflicts ultimately affect inter-personal relationships. Buxton says ‘what’s so intriguing about it is it’s so clearly structured and so visual. It’s a series of lighted tableaux, doors open on to a darkened stage and as each door is opened the stage is bathed in light. Judith looks into each room and sees his torture chamber, treasure chamber, whatever. It was so clear, going from one door to the next, the whole series of work was already there.’

Buxton responded to the ready made dramatic structure with a series of nine paintings based on excerpts of the music and text (a prologue, the seven doors and epilogue). As in the Wozzeck paintings (he works off piano/vocal scores for the intense and condensed effect given by a piano score) Buxton takes a moment of drama, paints the music and text to present a new dramatic interpretation, one that the viewer now responds to via Buxton’s use of paint and colour. In The Lake of Tears he uses a paint ‘called Steel, it’s not silver, it’s not grey, it’s pewter, that’s deliberate. Nothing’s left to chance, the drips are conscious, they’re weeping, it’s a watery substance, we are looking at a lake of tears.’ In The Torture Chamber in which the walls literally drip with blood ‘The colours I’m given to work with from the stage directions are beautiful colours. There is the richness of various reds, a few splatters, the dripping walls, the nature of cruel things having taken place in that room. All you’ve got is veils of colour and veils of meaning, there’s no physical idea of a room and that’s deliberate. There’s so much structure to look at in the music with all the lines and bars that there’s a lot of architecture to hang that nebulous notion of torture chamber, colours, drips, splatters on to.’

Not all operas are as dramatic as they could be but Nigel Buxton has an unerring instinct for THOSE contemporary operas that make forvital works of drama; as a result he has created paintings which breathe music and drama, human passion and desire, beauty and horror in a way which is both powerful and unique.